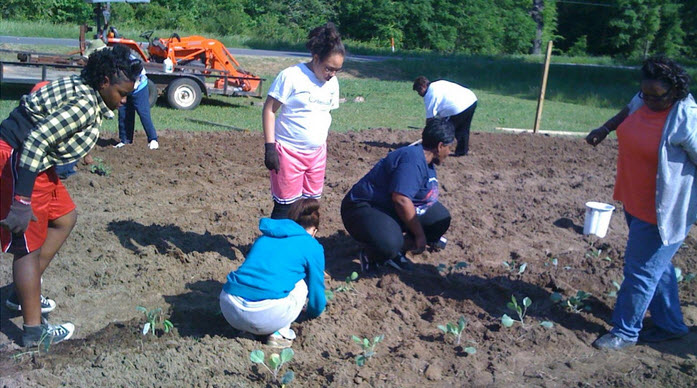 Food insecurity is a serious problem. Throughout America communities struggle with hunger amongst senior-citizens and families living in poverty. The CME church is growing a solution.Even in a land of plenty there are millions of our neighbors who do not know where their next meal will come from. In 2012, the Christian Methodist Episcopal (CME) Church in Alabama and Florida decided to combat hunger in their communities.

The Fifth Episcopal District, under the leadership of Bishop Teresa Snorton, launched an annual garden project aimed at directly impacting their churches and its surrounding neighborhoods. Over twenty-five churches have participated and at least ten have been annual participants. The program includes educational elements for planting and maintaining a garden that is located on church property. Participant Mrs. Carolyn Hassell of the Mt. Zion CME Church in Smiths Station, AL observes, “Our young people took so much pride in the plants they playfully put into the garden as well as the ones they took home for personal attention. We were able to share potatoes, tomatoes, okra, peppers, and beans with families and seniors in our church and community, an area that really doesn’t have any large grocery stores that sell fresh produce.” This hands-on approach has created enthusiasm within the congregations. It has built an adaptive and inter-generational mission that strengthens the church’s reach into the community.

Youth are learning gardening skills and helping others

Everything grown in the church-located gardens is given away either directly by the congregation to their members, to impoverished neighbors, or to local food pantries already willing and capable to distribute food to the needy.

With an eye on a future, the Fifth Episcopal District continues to grow this project by awarding a prize to the best garden each summer. In the years since its inception this highly-connective ministry has begun to win grants and garner support from businesses such as home improvement store Home Depot.

John Wesley once said, ”All worldly joys are less than that one joy of doing kindnesses,” and because of Bishop Snorton and the Christian Methodist Episcopal Church we know there is more joy in the world. The WesleyMen honor the Fifth Episcopal District’s efforts to identify hunger in its midst as intolerable and to act accordingly.